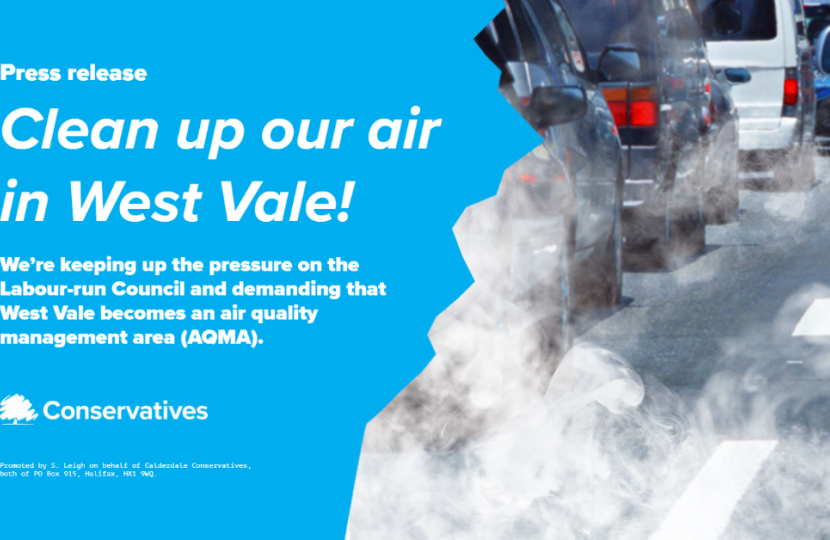 Labour-run Calderdale Council declared a ‘Climate Emergency’ in January 2019, but their record on the environment has been abysmal. Labour’s decision not to declare an Air Quality Management Area (AQMA) in West Vale at June’s Cabinet meeting in 2022 is a testament to their climate hypocrisy.

In the vicinity of West Vale over 600 additional houses are set to be built under Labour's Local Plan, adding more vehicles to an area where the infrastructure simply cannot cope. More vehicles will sit idle in traffic, impacting upon the health of primary school children and local care home residents.

The Labour Cabinet refused to endorse the Place Scrutiny Committee’s recommendation to declare an AQMA in an area which for years has been very marginally complying with national air quality objectives, but dismissed it based on unsound evidence citing improved levels of air quality in 2020, at the height of restrictions during the Covid-19 pandemic, when there were greatly reduced traffic volumes.

At the last Cabinet meeting, we heard Labour claim that the Department for Environment, Food and Rural Affairs (DEFRA) would not seriously consider an AQMA in West Vale, despite this decision being entirely at the discretion of the council.

If you support cleaning up our air in West Vale, back the campaign:

The Conservative Group has called-in the Labour Cabinet’s decision to introduce a Main Modifications Consultation on its Local Plan, for further consideration by the Place Scrutiny Board.