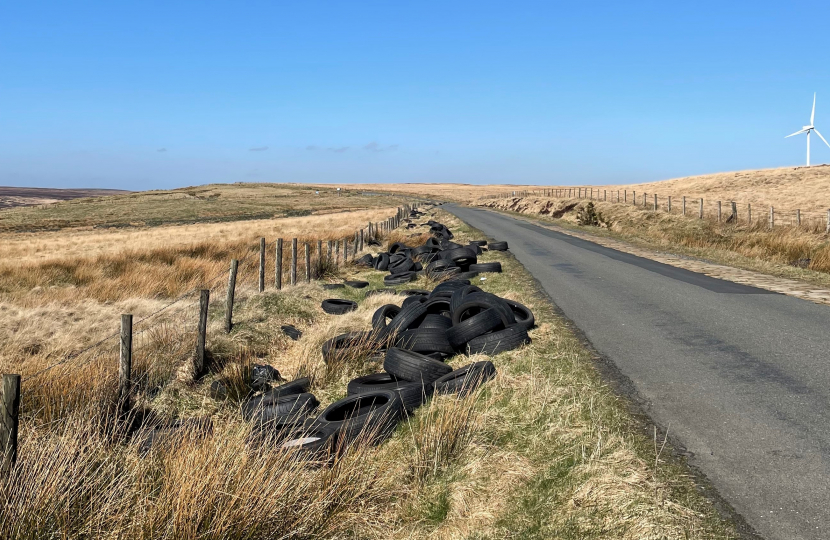 Thanks to the pressure put on Calderdale Council by Andrew Tagg, the Conservative candidate for Ovenden Ward at the most recent election - the dumped tyres on Cold Edge Road near Warley Moor Reservoir, have finally been cleared up!

As reported in the Halifax Courier on the 4 April 2022,  Andrew had made Calderdale Council aware of the tipped rubbish early in March.

“There are tyres along the route up to, I estimate half to three quarters of a mile.

“Either those responsible are going back and dumping more, or the original tipping was from a large HGV,” he said.

Mr Tagg wrote again to two senior councillors saying: “I made you aware that there were more than 20 tonnes of fly tipping along this beauty spot and as such is a stain on the reputation of Calderdale.”

The clean-up effort involved 14 people, ten vans and additional traffic management operatives and vehicles. It took the group around five hours to clear a large amount of tyres and other rubbish which had been dumped along a long stretch of the road.

Three tonnes of rubbish was cleared, with over 800 tyres collected.  The whole operation cost the Council around £4500.

The Conservative Group is determined to clamp down on fly-tipping, prosecute the offenders and keep our borough clean.